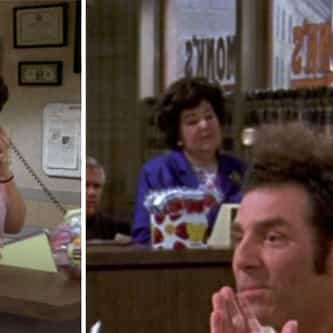 Ruth Cohen (January 28, 1930 – August 23, 2008) was an American character actress. She was born in The Bronx, New York. She is notable for appearing in more episodes of the NBC sitcom Seinfeld than any other actor, with the exception of the four main stars, Jerry Seinfeld, Jason Alexander, Michael Richards and Julia Louis-Dreyfus. Cohen played the role of the cashier in Monk's Café in 101 of the show's 180 episodes, mainly as an extra. The character was eventually named "Ruthie ... more on Wikipedia

Ruth Cohen IS LISTED ON

26.3k VIEWS How the Cast of Seinfeld Aged from the First to Last Season
Famous People From The Bronx Seinfeld Cast List