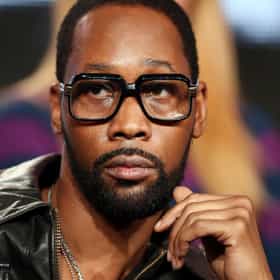 Robert Fitzgerald Diggs (born July 5, 1969), better known by his stage name RZA ( RIZ-ə), is an American rapper, record producer, musician, actor, and director. He is the de facto leader of the Wu-Tang Clan. He has produced almost all of Wu-Tang Clan's albums, as well as many Wu-Tang solo and affiliate projects. He is a cousin of two other original Wu-Tang Clan members: GZA and Ol' Dirty Bastard. He has also released solo albums under the alter-ego Bobby Digital, along with executive producing credits for side projects. Prior to forming the Wu-Tang Clan, RZA was a founding member of the horrorcore group Gravediggaz, where he went by the name The RZArector. RZA has been heavily involved ... more on Wikipedia

The Best RZA Songs 193 votes List of the top RZA songs, as voted on by fans like you. This poll includes all RZA hits, but true fans know there are other...
The Best RZA Albums of All Time 79 votes RZA is widely considered be one of the best East Coast rappers, especially as leader of the ever-popular Wu-Tang Clan. Here,...