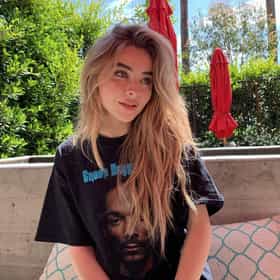 Sabrina Annlynn Carpenter (born May 11, 1999) is an American singer, songwriter, and actress. She had a recurring role as the young version of Chloe Goodwin in The Goodwin Games and starred as Maya Hart in the Disney Channel series Girl Meets World. She starred as Jenny Parker in 2016 Disney Channel Original Movie Adventures in Babysitting. She is signed to Hollywood Records. Her debut EP Can't Blame a Girl for Trying was released in 2014, and she has since released two full-length albums: Eyes Wide Open (2015) and Evolution (2016). Her third studio album, Singular: Act I, was released on November 9, 2018. ... more on Wikipedia

Sabrina Carpenter is ranked on...

#513 of 1,059 The Best Singers of All Time 2.2M VOTES Who are the best singers of all time? That's a tough question to ask. This list includes many of the greatest, most famous v...
#20 of 60 The Best New Female Artists 254.2k VOTES Rising female stars represent a diverse range of voices in the current music industry. From country to rap to pop, new femal...
#599 of 1,027 The Most Beautiful Women In Hollywood 4.4M VOTES The most beautiful women in the world are a great mix of attractive TV actresses, singers, models, and more, ...
#124 of 465 The Best Current Pop Groups/Singers 468.6k VOTES A list of the best current pop groups and singers who are making some of the best pop songs of 2019. The battle between...
#89 of 156 The Most Beautiful Young Actresses Under 30 1.2M VOTES The most beautiful actresses under 30 are some of the most talented actresses working in Hollywood today. These are all...
#123 of 200 The Female Singer You Most Wish You Could Sound Like 141.3k VOTES What female singer's voice would you most like to have? This is a different question than "who has the best female voic...
#60 of 79 Female Celebrities You'd Want to Be Your BFF 20.7k VOTES As you can tell from the tabloids, fame can do weird things to people, so celebrities who would be a good friend hold a...
#1 of 50 The Next Generation Of Stars (Age 20 and Under) 198k VOTES Before we know it, all the great actors and actresses from this generation will all be old and receiving Lifetime Achievemen...
#345 of 542 The Greatest Pop Groups & Artists of All Time 589k VOTES For years, pop music has dominated your radio dial. No matter where you listen, there's no doubt that pop music bands and po...
#33 of 70 The Best Pop Artists Of 2019, Ranked 238.1k VOTES Updated: check out our list of the best pop singers of 2020! Here are the best pop artists of 2019, ranked by fans ev...
Famous Taurus Female Celebrities 23k VIEWS A Taurus turns stubbornness into a positive trait. They put their persistence, positivity, and dependability to work when it...
#17 of 54 The Best Female Pop Singers Of 2019, Ranked 83.5k VOTES Updated: check out our list of the best female pop artists of 2020! Here are the best female pop singers of 2019, ranked b...
Famous People Named Sabrina 5.4k VIEWS If your name is Sabrina, then you're in some great company. Here's our list of the most famous people named Sabrina, includi...
Famous People Whose Last Name Is Carpenter 2.8k VIEWS Being a fairly common name, it's no surprise there are a lot of famous people with the last name Carpenter. Do you recognize...
Celebrities With Surprising Allergies 63.6k VIEWS They're among the most dreaded words in the English language: allergy season. But don't worry – while you're sneezing, scrat...

Sabrina Carpenter is also found on...