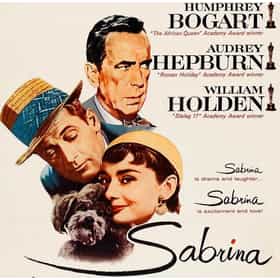 Sabrina is a 1954 American romantic comedy film directed by Billy Wilder, adapted for the screen by Wilder, Samuel A. Taylor, and Ernest Lehman from Taylor's play Sabrina Fair. It stars Humphrey Bogart, Audrey Hepburn, and William Holden. This was Wilder's last film released by Paramount Pictures, ending a 12-year business relationship with Wilder and the company. The film was selected for preservation in the United States National Film Registry by the Library of Congress in 2002. ... more on Wikipedia

Sabrina is ranked on...

#939 of 6,100 The Best Movies of All Time 5.6M VOTES These are the best movies of all time, ranked by movie experts and film fans alike. What are the greatest movies of all time...
#601 of 1,699 The Most Rewatchable Movies 3.3M VOTES There are some movies that I always stop at and watch if I see them on TV or I can put in the DVD player and watch when I'm ...
#49 of 170 The Greatest Date Movies of All Time 63.1k VOTES What are the best date night movies? That's a tricky question, because you've got your first date movies and your second dat...
#10 of 12 12 Rom-Com Plots That Are Actually The Stuff Of Nightmares 31.9k VOTES Sure, rom-coms are intended to be feel-good escapes, something mindless to make you laugh or help you forget a bad day....
#30 of 44 30+ Very Preppy Movies with the Preppiest Characters 1.2k VOTES We can't all live like the rich, but we can get a glimpse into the world of the preppy elite through great films. Very prepp...
#17 of 30 Great Movies Set Along the Coast 346 VOTES The coast may seem like a serene destination, but some of the most exciting movies of all time take place near the water. Th...
#46 of 75 The Greatest Classic Romance Movies 6.4k VOTES Who wouldn't swoon over a romantic tale of two people coming together against all odds to fall in love? These classic r...
#259 of 462 The Best Feel-Good Movies 431.9k VOTES Want to feel warm and fuzzy inside? This is a ranked list of the best feel-good movies that make us experience all the good ...
#63 of 201 The Best Movies of 1954 4k VOTES List of the best movies of 1954, with movie trailers when available. Film legends Paul Newman and Jack Lemmon made their big...
14 Old Hollywood Movies Where the Stars Totally Hooked Up IRL 205.8k VIEWS The seemingly limitless ingenuity of the human mind has allowed people to go to the moon, touch the bottom of the ocean, cur...
#9 of 65 The Best William Holden Movies 3.8k VOTES List of the best William Holden movies, ranked best to worst with movie trailers when available. William Holden's highest gr...
#5 of 38 The Best '50s Romantic Comedies 1k VOTES The 1950s are often remembered as a time marked by wholesome family values. But that doesn't mean that the decade's moviegoe...
#14 of 81 The Best Humphrey Bogart Movies 11.2k VOTES Here is a list of the best Humphrey Bogart movies, ranked best to worst with movie trailers when available. Everyone knows t...
#54 of 276 Good Movies for 13 Year Olds 108.5k VOTES This list has awesome movies for 13 year olds, ranked from best to worst by user votes. The best movies for 13 year olds cov...
#4 of 30 The Best Romance Movies of the '50s 2.1k VOTES This list of 1950s romance movies features some of the finest love stories on film, whether in color or in black and white. ...
#3 of 25 People who voted for Sabrina... also upvote Audrey Hepburn on The Most Beautiful Women of All Time The Very Best Audrey Hepburn Movies 6.2k VOTES One of the most beautiful women of all time, Audrey Hepburn also remains one of the greatest actresses ever to work on film....
#27 of 39 The Best Cinderella Movies 53.5k VOTES A list of the best Cinderella movies, ranked best to worst. These types of movies focus on the famous rags to riches Cindere...
#8 of 28 The Best Movies Directed by Billy Wilder 1.2k VOTES List of all movies directed by Billy Wilder ranked from best to worst with photos. Films directed by Billy Wilder are listed...

Sabrina is also found on...