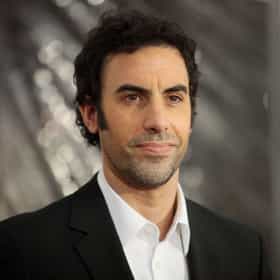 Sacha Noam Baron Cohen (Hebrew: סשה נועם ברון כהן‎; born 13 October 1971) is an English actor, comedian, screenwriter, director and film producer. He is known for creating and portraying many fictional satirical characters, including Ali G, Borat Sagdiyev, Brüno, Admiral General Aladeen, Erran Morad, and multiple others. Like his idol Peter Sellers, he adopts a variety of accents and guises for his characters and rarely appears out of character.In most of his routines, Baron Cohen's characters interact with unsuspecting people, documentary style, who do not realise they are being set up for comic situations and self-revealing ridicule. His other work includes voicing King Julien ... more on Wikipedia

Sacha Baron Cohen is ranked on...