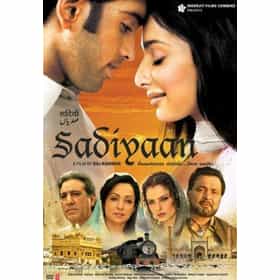 Sadiyaan is a Bollywood film released in 2010 which stars Rishi Kapoor, Hema Malini and Rekha. The story is about a family during the partition of India. The film was directed by Raj Kanwar and it has been distributed by the B4U and known as a B4U Movies Production. It was released on Friday, 2 April 2010. The film is genred as a Drama film and targeted for single screen audiences. Some of the scenes have been seen in other films lately. The film was the launch vehicle of Luv Sinha and featured Ferena Wazeir as his love interest. Sadiyaan bombed at the boxoffice and was declared a disaster. ... more on Wikipedia