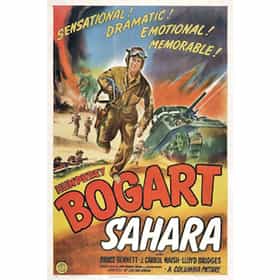 Sahara is a 1943 drama war film directed by Zoltán Korda. Humphrey Bogart stars as a U.S. tank commander in Libya during the Western Desert Campaign of World War II. The story is credited to an incident depicted in the 1936 Soviet film The Thirteen by Mikhail Romm. Later, Sahara was remade by André de Toth as a Western with Broderick Crawford called Last of the Comanches and by Brian Trenchard-Smith as the Australian film Sahara. In Sahara events are depicted which point to the Battle of Gazala, an important battle of the Western Desert Campaign of World War II, fought around the port of Tobruk in Libya. Bogart makes reference to events that occurred in May–June 1942. The ... more on Wikipedia

Sahara is ranked on...