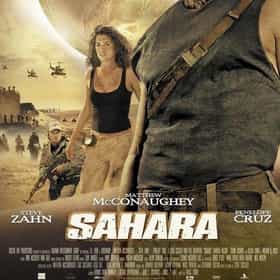 Sahara, an American/Spanish 2005 action–comedy adventure film directed by Breck Eisner, is based on the best-selling book of the same name by Clive Cussler. It stars Matthew McConaughey, Steve Zahn and Penélope Cruz. It opened at number one in the US box office, grossing $18 million on its first weekend. From a financial perspective, Sahara was unusual because it performed reasonably well, generating $119 million in gross box-office sales. However, due to its huge budget—including $130 million in production costs and $81.1 million in distribution expenses—its box-office take amounted to barely half of its expenses. The film lost approximately $105 million according to a ... more on Wikipedia

Sahara is ranked on...

Sahara is also found on...