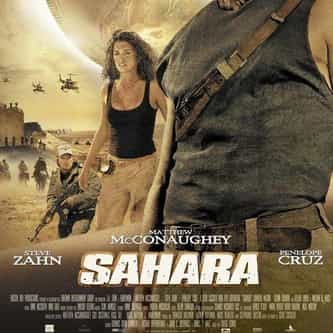 Sahara, an American/Spanish 2005 action–comedy adventure film directed by Breck Eisner, is based on the best-selling book of the same name by Clive Cussler. It stars Matthew McConaughey, Steve Zahn and Penélope Cruz. It opened at number one in the US box office, grossing $18 million on its first weekend. From a financial perspective, Sahara was unusual because it performed reasonably well, generating $119 million in gross box-office sales. However, due to its huge budget—including ... more on Wikipedia

Sahara IS LISTED ON

puss in boots characters, this musician was a composer of the notre dame school, what is santeria, actress too hot photos, medea goes to, bands with numbers in the name, best medical colleges in usa, who played rudy, funny spongebob pictures, best free rpg pc