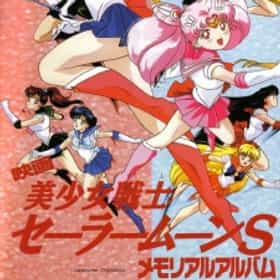 Sailor Moon is a media franchise created by Naoko Takeuchi. The series began as a manga published in 1991 and the anime adaptation began airing in March 1992. Since then, the series have been adapted into several different languages, including English. One of the series' later localizations, the English version was a broadcast success. The entire manga series has also been translated and published in English twice. The executive producer for the first 82 English adapted anime episodes was Andy Heyward and the other for the entire localization and the three films was Janice Sonski. Lisa Lumby-Richards is the only writer to be credited throughout the seasons, and the only script writer ... more on Wikipedia

Sailor Moon is ranked on...

#184 of 387 The Best Kids Cartoons of All Time 1.2M VOTES This list contains information about the best kids cartoons, ranked by your votes. Over the years, there have been tons of g...
#9 of 133 The Best Old School Anime From 1999 and Before 309.8k VOTES Young kids today don't know how good '80s anime and '90s anime really was. With the abundance of new anime that is available...
#200 of 717 The Best Cartoons of All Time 3M VOTES There have been many fantastic animated TV shows throughout the history, but which ones are the best? Some people think that...
#740 of 2,297 The Greatest TV Shows Of All Time 1.5M VOTES Choosing the best TV shows of all time means taking into account the best TV dramas, the best TV comedies, the best cartoons...
#59 of 130 The Best Fantasy Anime of All Time 395.5k VOTES From classics like Wolf's Rain to newer series like Sword Art Online, fantasy is one of the most popular genres of anime. Th...
#93 of 316 The Best English Dubbed Anime of All Time 1M VOTES If you're one of those people who only watches anime in Japanese, we don't blame you. English dubs can really ruin a series ...
#357 of 590 The Best TV Theme Songs of All Time 323.7k VOTES The best TV theme songs and TV intros of all time will take you back to some of the greatest moments in TV. Television theme...
#23 of 76 The 25+ Best First Anime to Watch for New Fans 74.1k VOTES Do you remember your first anime? For this list we're ranking the best first anime to watch, with the help of your votes. Wh...
#37 of 81 The 30+ Best Anime for Teens 95.9k VOTES You might think that all anime is good for teens to watch, but there are some very sexual and violent series out there that ...
#77 of 212 The Best Grown-Up Anime of All Time 559.6k VOTES For those of you looking for anime that is a bit more mature, like seinen anime, here's a list of the best adult anime ...
#18 of 99 The Best Shoujo Anime And Manga 70.2k VOTES For this poll we're ranking the best shoujo anime and manga, with the help of your votes. The shoujo demographic is aimed to...
#24 of 46 Which Anime Universe Would You Want To Live In? 80.2k VOTES The diverse world-building in anime makes choosing a universe to live in an almost impossible decision, but this list o...
#21 of 78 The 50+ Greatest Manga of All Time, Ranked 10.5k VOTES With thousands of manga titles out there, and new ones being published all the time, it can be hard to figure out which seri...
#2 of 102 The Very Best Anime for Kids 79.9k VOTES Since not all anime is intended for children to watch, we've compiled a list of series that are safe for younger viewers. Th...
#10 of 18 19 Anime That Almost Everyone Starts With 65.8k VOTES Every anime fan has a starter anime, that first series that really inspired them to keep watching. For many fans, their...
#52 of 58 Anime You Wish Was Streaming on Netflix 33.5k VOTES Although there are a lot of anime titles currently streaming on Netflix, there are so many titles that fans wish the service...
#8 of 19 The 19 Best Anime With Female Protagonists 12.2k VOTES It can be difficult to find good anime with female protagonists. Maybe it's because the otaku stereotype is s...
#14 of 25 The 25+ Anime Superpowers You Want Most 45.9k VOTES If you have ever seen any of the best shonen anime, you have probably fantasized about wielding some crazy an...
#36 of 54 The Best '90s Cartoon Theme Songs 31k VOTES The 1990s weren't only about grunge, Bill Clinton and the rise of the Internet, some amazingly talented animators were creat...
#736 of 1,328 The Best Guilty Pleasure TV Shows 19.7k VOTES List of the best guilty pleasure TV shows, past and present, including sitcoms, dramas, reality shows, and game shows. These...
#9 of 17 17 Anime With The Most Diehard Fans 6.6k VOTES There are people who like anime, and then there are diehard anime fans. A casual anime fan watches their favorite ...
#47 of 134 The Best Cartoon Network TV Shows 496.6k VOTES Cartoon Network shows have been bringing some of the funniest and most action-packed cartoons that both kids and adults can ...
#268 of 686 The Greatest Shows of the 1990s, Ranked 264.5k VOTES In the 1990s, television was one of the fastest growing mediums. More TV shows were popping up than ever before, and ratings...
#11 of 56 The Best YTV TV Shows 12.4k VOTES List of popular YTV shows, ranked from best to worst. This list of the top YTV TV series, both current and canceled series, ...
#44 of 101 The Best 1990s Animated Series 40.1k VOTES These are the top 1990s animated series, ranked from best to worst by user votes. The best 1990s animated series really ch...
#4 of 20 The Best Superhero Anime of All Time 11.6k VOTES List of the best superhero anime, voted on by Ranker's anime community. This may not be the most popular genre of Japanese...
#3 of 20 The Best Anime Like Cardcaptor Sakura 522 VOTES Winner of the Animage Grand Prix award for Best Anime in 1999, Cardcaptor Sakura is also notable for its wide appeal to all ...
#7 of 17 The Best Sentai Anime 322 VOTES List of the best sentai anime, voted on by Ranker's anime community. This may not be the most popular genre of Japanese anim...