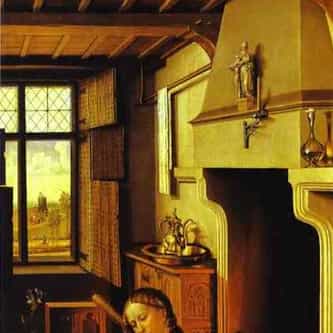 Saint Barbara (Greek: Αγία Βαρβάρα, Coptic: Ϯⲁⲅⲓⲁ Ⲃⲁⲣⲃⲁⲣⲁ), Feast Day December 4, known in the Eastern Orthodox Church as the Great Martyr Barbara, was an early Christian Greek saint and martyr. Accounts place her in the 3rd century in Heliopolis Phoenicia, present-day Baalbek, Lebanon. There is no reference to her in the authentic early Christian writings nor in the original recension of Saint Jerome's martyrology. Despite the legends detailing her story, the earliest references to her ... more on Wikipedia

84.6k readers The Real-Life Inspiration For Rapunzel Is A 3rd-Century Saint Who Was Beheaded By Her Own Father