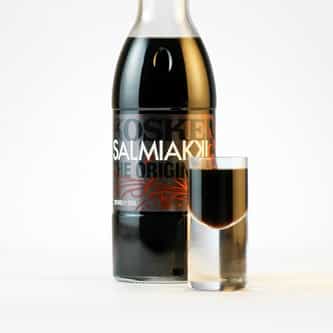 Salmiakki Koskenkorva, is a pre-mixed liqueur popular in Finland during the 1990s. Canonically salmiakkikossu consists of Koskenkorva Viina vodka and ground up Turkish Pepper brand salty liquorice. Very similar drinks are popular in Denmark, but are referred to with names like "Ga-Jol", "små blå" or "sorte svin" instead. In Northern Germany, there is also another very similar drink with the name "Schwarze Sau" which is based on Doppelkorn ... more on Wikipedia

Salmiakki Koskenkorva IS LISTED ON