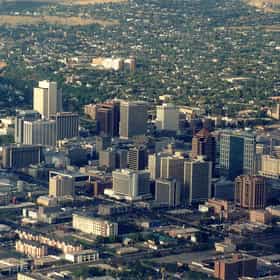 Salt Lake City, often shortened to Salt Lake, Salty, or SLC is the capital and the most populous city in the state of Utah. With an estimated population of 191,180 in 2013, the city lies in the core of the Salt Lake City metropolitan area, which has a total population of 1,153,340 as of the 2014 estimate. Salt Lake City is further situated in a larger urban area known as the Salt Lake City-Ogden-Provo, UT Combined Statistical Area. This region is a corridor of contiguous urban and suburban development stretched along an approximate 120-mile segment of the Wasatch Front, comprising a total population of 2,423,912 as of 2014. It is one of only two major urban areas in the Great Basin, ... more on Wikipedia

Salt Lake City is ranked on...

#14 of 116 People who voted for Salt Lake City... People in the Central US are 3x more likely to vote for this The Most Underrated Cities in America 61.5k VOTES When you think of the coolest American cities, you probably imagine places like Los Angeles and New York. But there is so mu...
#32 of 51 The Best Cities for Single Women 3.4k VOTES List of the top cities for single women. Single living for women is vastly different than for women who have the obligations...
#128 of 275 The Best U.S. Cities for Vacations 34.8k VOTES Vacationing in cities may not be as restful as spending a week or two out by the lake, and it may not always be the best opt...
#6 of 77 US Cities That Should Have an NFL Team 94.7k VOTES   Of course big cities like New York and Miami have NFL teams, but there are plenty of other cities that should have ...
#5 of 46 The Best US Cities for Nature Lovers 1.8k VOTES Do you love the great outdoors? Maybe you should consider moving to one of the spots on this list. Some great U.S. cities ...
#1 of 49 The Best US Cities for Hiking 1.2k VOTES Sometimes you just need to get away from it all. Luckily, there are so many good cities for hiking all across the United S...
#19 of 71 The Best Places to Raise a Family in the US 6.4k VOTES The best places to raise a family in the US are those thriving cities best suited so live when raising children. These Unite...
#48 of 53 The Best US Cities for Beer 7.4k VOTES There's nothing quite like a cold beer after a long day. And if you live in one of these cities, you know exactly where to f...
#23 of 34 The Best US Cities for Public Transportation 1.7k VOTES Big cities mean big populations, and that can mean big traffic problems. Fortunately, there are lots of good cities for pu...
#27 of 58 The Best Cities for Singles 3.9k VOTES List of the best cities for single men and women. Many cities are designed for the slower paced lives of families with 2.5 k...
#9 of 40 The Best Cities for Allergies 1k VOTES List of the top cities for people with allergies. It comes around every Spring, that plague known as allergy season. You may...
#33 of 35 The Best US Cities for Drinking 1.1k VOTES Looking for a place for a party? These top US cities for drinking would make for great getaways. Some great U.S. cities fo...
#23 of 51 The Best Cities for Young Couples 8.6k VOTES List of the best cities for young couples. Being a newlywed is exciting because it’s the start of a whole new life with the ...
Gay Events & Pride Parades Around the World 17.5k VIEWS Here is a list of gay pride parades and gay events celebrated around the world. The LGBT Community in each city plans and pu...
Public Transportation Maps From Around The World 2.9k VIEWS If you've ever used public transit, then you've likely encountered public transit maps, some of the most colorful and engagi...