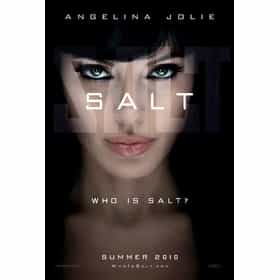 Salt is a 2010 American action thriller spy film directed by Phillip Noyce, written by Kurt Wimmer, and starring Angelina Jolie, Liev Schreiber, Daniel Olbrychski, August Diehl and Chiwetel Ejiofor. Jolie plays Evelyn Salt, who is accused of being a Russian sleeper agent and goes on the run to try to clear her name. Originally written with a male protagonist, with Tom Cruise initially secured for the lead, the script was ultimately rewritten by Brian Helgeland for Jolie. Filming took place on location in Washington, D.C., the New York City area, and Albany, New York, between March and June 2009, with reshoots in January 2010. Action scenes were primarily performed with practical ... more on Wikipedia

Salt is ranked on...

#594 of 1,699 The Most Rewatchable Movies 3.4M VOTES There are some movies that I always stop at and watch if I see them on TV or I can put in the DVD player and watch when I'm ...
#598 of 710 The Best Movies Roger Ebert Gave Four Stars 163.4k VOTES List of movies Roger Ebert gave four stars, ranked best to eh. This is NOT a complete list of all of Roger Ebert's four star...
#34 of 137 The Best Movies of 2010 9.4k VOTES A list of the best movies of 2010, from Westerns like True Grit to animated films like Toy Story 3. Some the best films of 2...
#37 of 92 The Most Rewatchable Action Movies 29.8k VOTES Is there such a thing as comfort movies when it comes to action films? This is a list of action movies we keep watching, eve...
#7 of 32 Blockbusters With No Cultural Impact Whatsoever, Ranked 5k VOTES How many times have you gone to the movies to see the latest big-budget film, only to leave asking yourself, "What did ...
#23 of 75 People who voted for Salt... People in the Northeast are 2x more likely to vote for this The Greatest Movies About CIA Agents & Operatives 46.6k VOTES These are films that focus on the United States Central Intelligence Agency, or its CIA agents, as ranked by spy-obsessed fa...
#8 of 34 The Best Movies About Agents and Operatives 681 VOTES When highly trained spies set out to complete secret missions it's hard to know who to trust. The best movies about agents...
#3 of 52 The Most Exciting Movies About Female Assassins 773 VOTES What are the best female assassin movies? Now is your chance to weigh in. There is something about movies with women assassi...
#76 of 102 The Best Action Movies Of The 2010s, Ranked 27.1k VOTES Buckle up, because it's time to vote for the top 2010s action movies. This has been an extraordinary decade for action ...
#47 of 163 The Best Spy Movies 58.9k VOTES On a secret mission to find a list of all the best spy movies ever made? Here it is! Many of these films are streaming on Ne...
#6 of 70 The Best Female Action Movies, Ranked 10.4k VOTES This list contains information on the best female action movies, ranked from best to worst by user votes. The best female ac...
#10 of 50 The Best Thriller Movies of 2010 391 VOTES List of the best 2010 thriller movies, ranked by how many upvotes they've received by other fans of the genre. These thrille...
#5 of 61 The Best Liev Schreiber Movies 910 VOTES List of the best Liev Schreiber movies, ranked best to worst with movie trailers when available. Liev Schreiber's highest gr...
#15 of 28 The Best Chiwetel Ejiofor Movies 182 VOTES List of the best Chiwetel Ejiofor movies, ranked best to worst with movie trailers when available. Chiwetel Ejiofor's highes...
Biggest Movies 2010 7.4k VIEWS The top-grossing movies of 2010, from Toy Story 3 to Inception to The Twilight Saga Eclipse. These aren't the top movies o...

Salt is also found on...