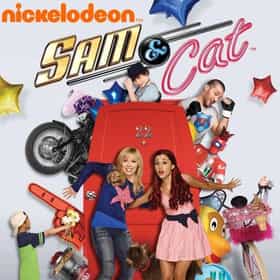 Sam & Cat is an American teen sitcom that originally aired from June 8, 2013 to July 17, 2014, on Nickelodeon. It is a crossover spin-off/sequel of both iCarly and Victorious. It stars Jennette McCurdy as Sam Puckett and Ariana Grande as Cat Valentine. The girls meet by chance during a bizarre adventure and become roommates, then start a babysitting business to earn extra money. The series was picked up for 20 episodes on November 29, 2012. It began production in January 2013 and premiered on June 8, 2013. The first season was doubled to 40 episodes on July 11, 2013. At the Nickelodeon upfront meeting with advertisers on March 13, 2014, Nickelodeon programming president Russell ... more on Wikipedia

#43 of 103 People who voted for Sam & Cat... People under 30 are 2x more likely to vote for this also upvote Rugrats Franchise on The Best Nickelodeon Movies The Best Nickelodeon Original Shows 174.4k VOTES Nickelodeon, also sometimes referred to as “Nick” is an American paid cable and satellite TV network which specifically cate...
#264 of 292 The Greatest Sitcoms in Television History 938.5k VOTES Best sitcoms ever to air on television includes some of the greatest sitcoms of all time as ranked by fans of TV. What's the...
#426 of 505 The Best Duos of All Time 377.2k VOTES The greatest duos of all time can exist independently of each other, but totally shouldn't. These are combinations and famou...
#38 of 146 The Most Annoying Kids Shows of All Time 80.2k VOTES There's something about TV shows made for children that can really put the rest of the world on edge. The loudness, the obno...
#49 of 100 People who voted for Sam & Cat... also upvote Star Wars Franchise on The Best Epic Movies also upvote Lord of the Rings Franchise on The Most Rewatchable Movies The Best TV Spinoffs 33.8k VOTES What are the very best TV spin-offs in history? This list definitely includes many. Some of the best TV spin-off shows were,...
#108 of 260 The Best Female-Led TV Shows 24.3k VOTES While society has by no means reached actual equality, in the last few years television viewers have started to see an uptic...
#291 of 408 The Best TV Shows to Rewatch 131.1k VOTES List of the best TV shows to rewatch, as ranked by television fans and critics. When the weekend comes around and you can’t ...
#79 of 123 TV Shows with the Hottest Casts 178k VOTES List of TV shows with the hottest casts. This list of the sexiest ensembles on television includes popular primetime dramas ...
#8 of 32 The Best Kids Shows of 2013 2.3k VOTES Finding a great television show that’s perfect for kids to watch on a lazy Saturday morning can be tough in this day and age...
#154 of 1,328 The Best Guilty Pleasure TV Shows 19.5k VOTES List of the best guilty pleasure TV shows, past and present, including sitcoms, dramas, reality shows, and game shows. These...
#89 of 144 The Best TV Shows of 2014 5.7k VOTES The best TV shows, 2014 edition. What was your favorite TV show of 2014? 2014 was a great year for television, from Game of ...
#32 of 37 TV Shows with the Best Episode Names 4.8k VOTES Are you one of those people who tracks and remembers the TV episode names of your favorite shows? Yeah, us too. And the Inte...
#48 of 63 The Best TV Shows That Were Canceled in 2014 16.9k VOTES This list of 2014's canceled shows will include all major television programs that get the ax over the course of the year on...
#13 of 46 The Best New Teen TV Shows of the Last Few Years 97.2k VOTES With so many great TV series currently airing, we're ranking the best teen TV shows since 2015. Our list of the highest rate...
#39 of 104 The Best Teen Comedy Series Ever Made 3.3k VOTES Comedy series for teens have to walk a delicate line, not being so childish they’re off-putting to their audience, but also ...
#7 of 55 The Best 2010s Nickelodeon Shows 26.4k VOTES These are the best 2010s Nickelodeon shows, ranked from best to worst by user votes. Some top 2010s Nickelodeon shows were N...
#29 of 87 The Best Teen Sitcoms of All Time 24.1k VOTES The best teen sitcoms serve not only as a reflection of teen life but also an educational tool. They’re filled with moral an...
#31 of 38 The Best TeenNick TV Shows 25.1k VOTES List of popular TeenNick shows, ranked from best to worst. This list of the top current and cancelled TeenNick TV series inc...
#108 of 108 The Best TV Shows Set In L.A. 1.8k VOTES Los Angeles, California is not only where most television series are filmed, but it also tends to be where they're set as we...
#43 of 56 The Best Kids Live Action TV Shows Ever Made 1.8k VOTES Chances are if you grew up sometime in the latter half of the 20th century, your childhood was filled with amazing chil...
#31 of 61 The Funniest Kids Shows Ever Made 3.3k VOTES Kids love to laugh. While their parents may try to get them to watch educational programming, kids just want to change the c...
#28 of 33 The Best Spin-Offs of the 2010s 497 VOTES Spin-offs have always been a huge part of television programming, and with the rise of Peak TV in the 2010s it seems there's...
#2 of 12 The Best Nickelodeon UK TV Shows 407 VOTES List of popular Nickelodeon UK shows, ranked from best to worst. This list of the top current and cancelled Nickelodeon UK T...