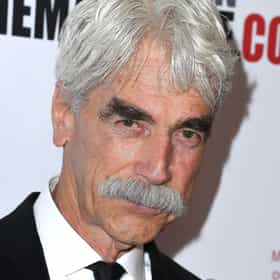 Samuel Pack Elliott (born August 9, 1944) is an American actor. His lanky physique, thick moustache, deep and resonant voice and Western drawl have led to frequent roles as cowboys and ranchers. His accolades include an Academy Award nomination, two Golden Globe Award nominations, two Primetime Emmy Award nominations, and a National Board of Review Award for Best Supporting Actor. Elliott began his film career with minor appearances in The Way West (1967) and Butch Cassidy and the Sundance Kid (1969), and guest-starred on television in the Western Gunsmoke (1972) and the television films Murder in Texas (1981) and The Shadow Riders (1982). His film breakthrough was in the drama ... more on Wikipedia

Sam Elliott is ranked on...

#112 of 194 The Hottest Men Over 40 1.2M VOTES The hottest men in Hollywood? Turns out, the older they get, the more we like them! Like fine wines, tweens, and your favori...
#7 of 330 People who voted for Sam Elliott... People over 50 are 2x more likely to vote for this The Coolest Actors Ever 760.1k VOTES As movie fans, we like to think of our favorite actors as being larger than life. With all of the coverage that these stars ...
#174 of 1,145 The Best Actors in Film History 2.3M VOTES The best actors ever are ranked here in this list of the best actors in film history. These are the greatest actors ever to ...
#60 of 258 The Best Marvel Movie Actors Ever 633.7k VOTES Ah Marvel movies. It began in 1944 with serialized films of Captain America and 70 years later, are one of the biggest, most...
#20 of 165 The Greatest Western Movie Stars 241.9k VOTES All the greatest Western movie stars of television and film in one list of the best cowboy actors. Some of these top Western...
#25 of 129 Celebrities You'd Let Babysit Your Kid 68k VOTES Parents need to be extra careful when choosing a babysitter for your children, and picking a celebrity babysitter invol...
#82 of 313 Famous People Most Likely to Live to 100 13.8k VOTES Sometimes, age really is just a number. But these healthy old celebrities seem to be defying time like no others. These clas...
#54 of 53 The Best Jazz Trombonists in the World 2.6k VOTES The trombone is a versatile instrument that is a staple of jazz music and essential to all jazz ensembles. The jazz trombo...
#15 of 32 Celebrities Who Have Always Been Old 4k VOTES Have you ever noticed that there are some celebrities that don't age but have always been old? It doesn't matter how young t...
Famous People Named Samantha 20.9k VIEWS If your name is Samantha, then you're in some great company. Here's our list of the most famous people named Samantha, inclu...
Celebrities Who Live in Oregon 6.5k VIEWS This list includes information about celebrities who live in Oregon, loosely ranked by popularity. Celebrities that live in ...
Famous People Named Sam & Samuel 66.8k VIEWS List of famous people named Sam or Samuel, along with photos. How many celebrities named Sam can you think of? The famous Sa...
Celebrities Who Turned 75 in 2019 3.8k VIEWS UPDATED: Check out the celebrities turning 75 in 2020! Several famous people celebrated their 75th birthdays in 2019....
Famous People with Raspy Voices 447.9k VIEWS When a strong man has a raspy voice, it can make him seem more rugged and tough. A beautiful woman with a husky voice m...
30+ Celebrities Who Were in Sigma Alpha Epsilon 17.1k VIEWS "The True Gentleman." That is the creed of Sigma Alpha Epsilon, and its members have memorized it since the frater...

Sam Elliott is also found on...