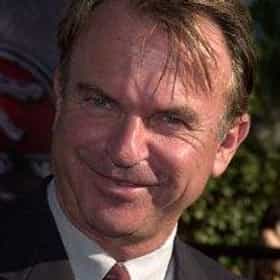 Nigel John Dermot Neill (born 14 September 1947), known professionally as Sam Neill, is a New Zealand actor, writer, producer, director, and vineyard owner. Born in Omagh, Northern Ireland, he moved to Christchurch with his family in 1954. Neill first achieved recognition with his appearance in the 1977 film Sleeping Dogs, which he followed with leading roles in My Brilliant Career (1979), Omen III: The Final Conflict, Possession (both 1981), A Cry in the Dark (1988), Dead Calm (1989), and The Piano (1993). He came to international prominence with his portrayal of Dr. Alan Grant in Jurassic Park (1993), reprising the role in 2001's Jurassic Park III. Outside of film, Neill has appeared ... more on Wikipedia

Sam Neill is ranked on...

#263 of 337 The Coolest Actors Ever 735.3k VOTES As movie fans, we like to think of our favorite actors as being larger than life. With all of the coverage that these stars ...
#11 of 48 The Best Irish Actors Working Today 6.2k VOTES There have been plenty of great Irish actors throughout film history, but which male Irish actors working today are the grea...
#309 of 2,003 People who voted for Sam Neill... People in the Northeast are 2x more likely to vote for this also upvote Indiana Jones Franchise on The Best Movies of All Time The Greatest Actors & Actresses in Entertainment History 1.7M VOTES The best actors and actresses of all time, male and female, ranked by film fans worldwide. This list of greatest actors and ...
#105 of 333 The Greatest Actors Who Have Never Won an Oscar (for Acting) 452.3k VOTES There are many actors who haven't won an Oscar. For 95 percent of the acting population, there is probably a good reason the...
#131 of 505 The Best TV Actors of All Time 107.1k VOTES The greatest TV actors of all time. Some of these actors have been in movies, some of them are even more well known at this ...
#157 of 255 Actors You Would Watch Read the Phone Book 315.5k VOTES List of actors who you would watch do something as mundane as read the phone book. Some of these guys are leading men, consi...
#4 of 15 Cast Of 'The Tudors' Vs. The Real People 3.3k VOTES The Tudors was a historical fiction TV series that originally aired on Showtime from 2007 to 2010. The show followed the liv...
#22 of 22 Celebrities With The Weirdest Twitter Accounts 806 VOTES Let's be frank for a moment: despite what you may have heard, celebrities are not like us. Yes, they (probably) put their pa...
#32 of 78 Famous Actors Who Were Almost James Bond 63.2k VOTES Skyfall once again showcased Daniel Craig as one of the most suave and simultaneously vulnerable Bonds in the history of the...
#49 of 75 The Greatest Guest Appearances in The Simpsons History 8.1k VOTES With 25+ seasons completed and seemingly no end in sight, there is certainly no shortage on the number of celebrity guest st...
#15 of 48 The Best Irish Actors of All Time 41.8k VOTES Sure, Colin Farrell is a handsome bad boy, but what about all those other great Irish actors? This list of the best Irish ac...
#10 of 12 The Best Living Irish Actors 18.9k VOTES Though many great Irish actors and film stars have passed on, Hollywood is full of excellent Irish acting talent who are sti...
Celebrities You Didn't Know Use Stage Names 1.7M VIEWS List of celebrities with stage names, loosely ranked according to fame and popularity. It's tough to break into show busin...
Lifetime Movies Actors and Actresses 14.7k VIEWS Lifetime Movies employs a wide range of actors -most of which you will recognize from more than just TV movies. Lifetime act...
The Single Best Celebrity Tweets Of 2019 5.8k VIEWS Once you become famous, having an active social media presence is a must. Most celebrity tweets are just promotions for thei...
Famous People Named Samantha 20.1k VIEWS If your name is Samantha, then you're in some great company. Here's our list of the most famous people named Samantha, inclu...
Famous People Named Sam & Samuel 62.7k VIEWS List of famous people named Sam or Samuel, along with photos. How many celebrities named Sam can you think of? The famous Sa...
35 Famous People Who Stutter 168.5k VIEWS Many celebrities and Hollywood stars are poised and eloquent, but it might surprise you to see who is on this list of famous...
Famous Members of the Anglican Church 11k VIEWS Faith is an important part of many people's lives, and a number of notable singers, athletes, and performers are members o...
Famous People Who Stutter 6.8k VIEWS Celebrities often talk for a living. So it's surprising to note that a number of notable people have stutters or other speec...

Sam Neill is also found on...