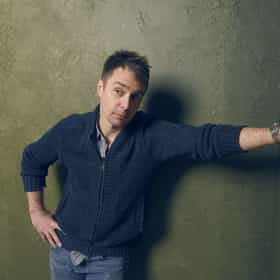 Sam Rockwell is ranked on...

#61 of 329 The Greatest Actors Who Have Never Won an Oscar (for Acting) 468.1k VOTES There are many actors who haven't won an Oscar. For 95 percent of the acting population, there is probably a good reason the...
#313 of 1,145 The Best Actors in Film History 2.2M VOTES The best actors ever are ranked here in this list of the best actors in film history. These are the greatest actors ever to ...
#121 of 180 The Best Living American Actors 273.4k VOTES It takes a lot to make a movie great. There has to be excellent writing, production, direction, editing, and of course, acti...
#227 of 330 The Coolest Actors Ever 758.7k VOTES As movie fans, we like to think of our favorite actors as being larger than life. With all of the coverage that these stars ...
#151 of 282 People who voted for Sam Rockwell... also upvote Star Wars Franchise on The Best Movies of All Time also upvote The Godfather Franchise on The Best Movies of All Time The Best (Male) Actors Working Today 1.5M VOTES The best actors working today include Hollywood legends, Academy Award winners and many of the top up and coming actors in t...
#6 of 52 Actors Who Almost Got the Part in a DC Film 9.6k VOTES Casting is truly an art form. Each and every cast member from starring, to supporting, to day-player, affects the entire ton...
#51 of 258 The Best Marvel Movie Actors Ever 631.6k VOTES Ah Marvel movies. It began in 1944 with serialized films of Captain America and 70 years later, are one of the biggest, most...
#101 of 117 Actors Who Consistently Make Great Movies 63.1k VOTES Most working stars in the film industry are just going from paycheck to paycheck; taking any job just to earn a living. Rega...
#2 of 50 50+ Actors You Forgot Were In Comic Book Movies 40.9k VOTES Over the years, some of the most celebrated actors in history have shown up on the big screen to star, to support, or even j...
#47 of 56 The Best Marvel Superhero Movie Actors 102.9k VOTES Comic book movies are especially hard to cast because there are so many die hard fans of these characters who see them all t...
#13 of 47 Actors Who Could Replace Jared Leto as the Joker 33.6k VOTES After his performance as the Joker in Suicide Squad was met with tepid reviews, Jared Leto declared he felt "tricked&qu...
#3 of 13 Who Would Star In '10 Things I Hate About You' If It Was Made Today? 1.3k VOTES When it was released in 1999, 10 Things I Hate About You quickly became the teen flick of the moment, helping to e...
#11 of 29 30 Actors Who Could Make a Great Carnage 13.9k VOTES In Sony Pictures' Spider-Man spin-off Venom, starring Tom Hardy as Eddie Brock, we at long last, get a q...
#6 of 32 The Best Actors Who Won All 5 Major Awards for the Same Role in the 21st Century 8.5k VOTES Some Hollywood actors go above and beyond just taking home an Oscar - this distinguished class of thespians have turned in p...
Every Person Who Has Hosted 'Saturday Night Live' 52.1k VIEWS Live from New York! It's Saturday Night! This is a list of all Saturday Night Live hosts, in reverse order,...
Actors Who Were THIS CLOSE to Playing Superheroes 2.1M VIEWS We’re sure that some people think that it’s easy to slap together a superhero movie, but a good movie, especially a good sup...
Every Single Celebrity Who Has Guest Starred on Drunk History 8.7k VIEWS Comedy Central's Drunk History has it all, from the boozy narration of notable historic moments to rotating cast members who...
Celebrity Deformities You Never Noticed 955.7k VIEWS Believe it or not, some of Hollywood's beautiful stars have secret flaws. This list reveals the celebrity deformities you ne...

Sam Rockwell is also found on...