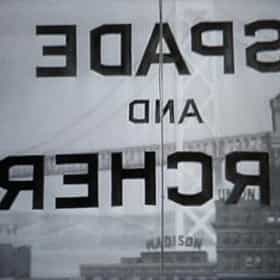 Sam Spade is a fictional private detective and the protagonist of Dashiell Hammett's 1930 novel, The Maltese Falcon. Spade also appeared in three lesser-known short stories by Hammett. The Maltese Falcon, first published as a serial in the pulp magazine Black Mask, is the only full-length novel in which Spade appears. The character, however, is widely cited as a crystallizing figure in the development of hard-boiled private detective fiction – Raymond Chandler's Philip Marlowe, for instance, was strongly influenced by Spade. Spade was a departure from Hammett's nameless and less-than-glamorous detective, The Continental Op. Spade combined several features of previous detectives, most ... more on Wikipedia

Sam Spade is ranked on...

#61 of 94 The Most Likable Movie Antiheroes 58.4k VOTES What makes an antihero cool? Well, they’re usually pretty multi-dimensional. They possess villainous qualities, yes, but the...
#64 of 101 Movie Tough Guys Without Super Powers or a Super Suit 36.9k VOTES In the age of the superhero movies, it's easy to forget sometimes that there are tough guys who don't need to hide behind su...
#40 of 93 The Greatest Fictional Cops & Law Enforcement Officers of All Time, Ranked 11.6k VOTES Criminals should beware of these great fictional cops, as they almost always get the perp in the end. From movies, TV shows,...