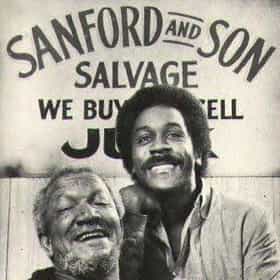 Sanford and Son is an American sitcom, based on the BBC's Steptoe and Son, that ran on the NBC television network from January 14, 1972, to March 25, 1977. Known for its edgy racial humor, running gags and catch phrases, the series was adapted by Norman Lear and considered NBC's answer to CBS's All in the Family. Sanford and Son has been hailed as the precursor to many other African American sitcoms. It was a ratings hit throughout its six-season run. While the role of Fred G. Sanford was known for his bigotry and cantankerousness, the role of Lamont Sanford was that of a conscientious peacemaker. At times, both characters would involve themselves in schemes. Other ... more on Wikipedia

lists about Sanford and Son

Sanford and Son is ranked on...

Sanford and Son is also found on...