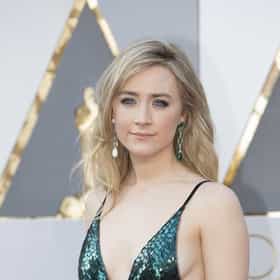 Saoirse Una Ronan ( SUR-shə; born 12 April 1994) is an Irish and American actress. Primarily noted for her work in period dramas since a teenager, she has received several awards, including a Golden Globe Award, and has been nominated for three Academy Awards and four British Academy Film Awards. Ronan made her acting debut with the Irish medical drama series The Clinic in 2003 and her first film appearance was in a supporting role in the romantic comedy I Could Never Be Your Woman in 2007. Her breakthrough came with the part of a precocious teenager in Atonement (2007), for which she was nominated for the Academy Award for Best Supporting Actress. Ronan followed this with starring ... more on Wikipedia

Saoirse Ronan is ranked on...

Saoirse Ronan is also found on...