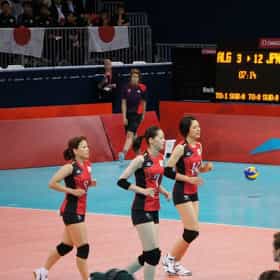 Saori Kimura (木村 沙織, Kimura Saori, born August 19, 1986) is a Japanese volleyball player who played for Toray Arrows. She also played for the All-Japan women's volleyball team and was a captain of the team. She was a participant at the 2004 Summer Olympics, 2008 Summer Olympics, 2012 Summer Olympics and 2016 Summer Olympics, winning a bronze medal in 2012. Her nicknames are Japan's future, Infinite Saorin (ニッポンの未来 サオリン無限大 Nippon no mirai Saorin Mugendai) and Miracle Saorin. She was so versatile that she could play any position. On 10 July 2012, Toray announced that Kimura will move to VakıfBank Türk Telekom next season.On 3 June 2013, Daikin (which is a sponsor of Galatasaray ... more on Wikipedia

Saori Kimura is also found on...