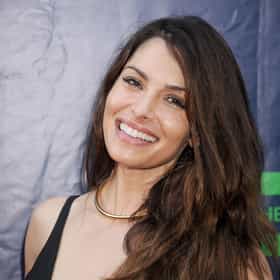 Aahoo Jahansouz "Sarah" Shahi (Persian: آهو جهانسوز سارا شاهی‎; born January 10, 1980) is an Iranian-American television actress and former NFL Cheerleader of Iranian and Spanish ancestry. She played Kate Reed in the USA Network legal drama Fairly Legal in 2011–12, Carmen on The L Word in 2008, and also starred as Sameen Shaw on the CBS crime drama Person of Interest. She has also appeared as the main female role Det. Dani Reese in Life, and in a supporting role in Alias. In 2018, she starred in the series Reverie. In 2019, she appeared in a few episodes of City on a Hill on Showtime. ... more on Wikipedia

Sarah Shahi is ranked on...

#167 of 3,307 People who voted for Sarah Shahi... Men are 3x more likely to vote for this People in the Northeast are 2x more likely to vote for this The Most Beautiful Women of All Time 132.1M VOTES Here are the most beautiful women of all time ranked not on looks alone, regardless of their talent. Thi...
#144 of 568 The Most Beautiful Women Of 2019, Ranked 1.3M VOTES UPDATED: Check out the most beautiful women of 2020! This list rounds up the most beautiful women in the world in 2019. Th...
#187 of 1,026 The Most Beautiful Women In Hollywood 4.4M VOTES The most beautiful women in the world are a great mix of attractive TV actresses, singers, models, and more, ...
#328 of 479 Famous Women You'd Want to Have a Beer With 752.8k VOTES If given the opportunity to sit down for a beer with any famous female figure, which famous women would you most want to get...
#27 of 162 The People's 2011 Maxim Hot 100 List 102.4k VOTES Each year, Maxim magazine chooses the most beautiful women to feature on their coveted list of the 100 hottest girls in the ...
#390 of 3,140 The Most Beautiful Celebrities Of Our Time 6.3M VOTES This list of hot celebrities is ranked by pop culture junkies worldwide, making it the best place to find the most attractiv...
#245 of 255 Actors You Would Watch Read the Phone Book 315.5k VOTES List of actors who you would watch do something as mundane as read the phone book. Some of these guys are leading men, consi...
#37 of 98 The Most Gorgeous American Models 62.3k VOTES American fashion models and supermodels: Every well-known American top model and female models from the US are listed h...
#41 of 266 Who Should Be in the 2012 Maxim Hot 100? 113.8k VOTES Maxim Magazine is accepting votes for their 2012 Hot 100 list, but I want to hear what the Ranker Community has to say. Use ...
#64 of 415 Maxim's Nominees for the 2015 Hot 100 191.4k VOTES Here are Maxim's nominees for the 2015 hot 100. This is the issue of Maxim that gentlemen around the world look forward to m...
#19 of 39 Millennials Who Use Stage Names 1.3k VOTES These celebrity millennials knew that it's tough to break into show business, but that a good stage name might give you a le...
#4 of 29 The Hottest Muslim Women Under 40 5.4k VOTES Here are the hottest Muslim women under 40. So here in one place are all the hottest young sexy Muslims that grace our scree...
#49 of 327 Who Should Be in the 2013 Maxim Hot 100? 134.7k VOTES Maxim Magazine is accepting votes for their 2013 Hot 100 list, but before that's published the Ranker Community is going to ...
#25 of 46 Female Celebrities You'd Want Under Your Christmas Tree 8.3k VOTES Who needs two front teeth when you can have these hot women for Christmas? Well ... You can't actually have them, but you ca...
Celebrities You Didn't Know Use Stage Names 1.7M VIEWS List of celebrities with stage names, loosely ranked according to fame and popularity. It's tough to break into show busin...
275+ Celebrities with Twin Children 394.8k VIEWS List of celebrities who have twin children, along with the names of the kids, their years of birth, and their other parent...
Famous People Named Sarah or Sara 39k VIEWS List of famous people named Sarah, along with photos. How many celebrities named Sarah or Sara can you think of? The famous ...
#2 of 10 The Most Stunning Iranian Actresses 5.4k VOTES A full list of alluring Iranian actresses of all time with photos included. Not all of these actresses are Persian or w...
Famous People Named Sara 13.5k VIEWS If your name is Sara, then you're in some great company. Here's our list of the most famous people named Sara, including pho...
31 Celebrities Who Are Persian 146.2k VIEWS This list contains information about Persian celebrities, loosely ranked by fame and popularity. Persian people are Irania...
Underappreciated Celeb Hotties 99k VIEWS This list is a compilation of some of the underappreciated female celebrities. They are ranked in the same order as my full ...
EW.com's Wildly Underrated TV Actresses 11k VIEWS These are the prime-time wonder women you say deserve more attention http://www.ew.com/ew/gallery/0,,20239137,00.html
Celebrity Babies Who Were Born in 2015 44.6k VIEWS Another year, another crop if super adorable celebrity kids! This list includes all of the celebrity babies born in 2015. Sa...

Sarah Shahi is also found on...