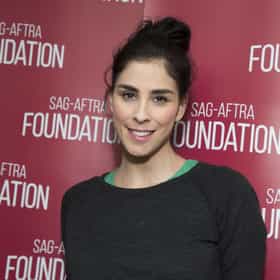 Sarah Kate Silverman (born December 1, 1970) is an American stand-up comedian, actress, singer, producer, and writer. Her comedy addresses social taboos and controversial topics, such as racism, sexism, politics, and religion, sometimes having her comic character endorse them in a satirical or deadpan fashion. For her work on television, she has won two Primetime Emmy Awards. Silverman was a writer and performer on Saturday Night Live, and starred in and produced The Sarah Silverman Program, which ran from 2007 to 2010 on Comedy Central, for which she was nominated for a Primetime Emmy Award for Outstanding Lead Actress in a Comedy Series. She released an autobiography The Bedwetter in ... more on Wikipedia

Sarah Silverman is ranked on...

Sarah Silverman is also found on...