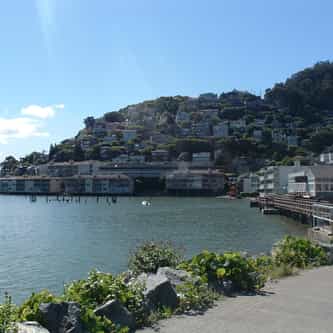 Sausalito is a San Francisco Bay Area city in Marin County, California. Sausalito is 8 miles south-southeast of San Rafael, at an elevation of 13 feet. The population was 7,061 as of the 2010 census. The community is situated near the northern end of the Golden Gate Bridge, and prior to the building of that bridge served as a terminus for rail, car, and ferry traffic. Developed rapidly as a shipbuilding center in World War II, the city's industrial character gave way in postwar years to a ... more on Wikipedia

Sausalito IS LISTED ON