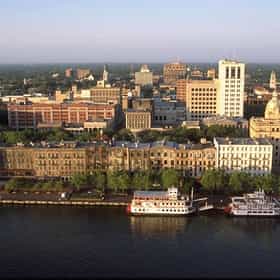 Savannah is the oldest city in the U.S. state of Georgia and is the county seat of Chatham County. Established in 1733, the city of Savannah became the British colonial capital of the Province of Georgia and later the first state capital of Georgia. A strategic port city in the American Revolution and during the American Civil War, Savannah is today an industrial center and an important Atlantic seaport. It is Georgia's fifth-largest city and third-largest metropolitan area. Each year Savannah attracts millions of visitors to its cobblestone streets, parks, and notable historic buildings: the birthplace of Juliette Gordon Low, the Georgia Historical Society, the Telfair Academy of Arts ... more on Wikipedia

Creepy Haunted Hotels In Savannah 8.7k views Savannah is a city known for rich history, amazing food, and everlasting spirits - but we're not talking about the open cont...

Savannah is ranked on...