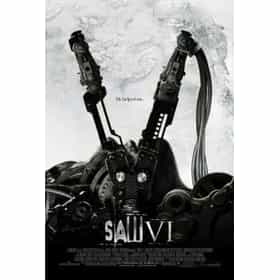 Saw VI is a 2009 Canadian-American horror film directed by Kevin Greutert from a screenplay written by Patrick Melton and Marcus Dunstan. It is the sixth installment in the seven–part Saw franchise and stars Tobin Bell, Costas Mandylor, Betsy Russell, Mark Rolston, Peter Outerbridge, and Shawnee Smith. It was produced by Mark Burg and Oren Koules of Twisted Pictures and distributed by Lionsgate. Saw VI concludes the second trilogy of the series that focused on the posthumous effects of the Jigsaw Killer and the progression of his successor, Mark Hoffman. In this film, Hoffman sets a series of traps for an insurance executive, William Easton, and his employees. Meanwhile the FBI trails ... more on Wikipedia

The Best Saw Characters in the Whole Franchise, Ranked 4.8k votes Film buffs, we are ranking the greatest characters in the Saw franchise. From 2004's Saw to 2010's Saw 3D, the best Saw seri...