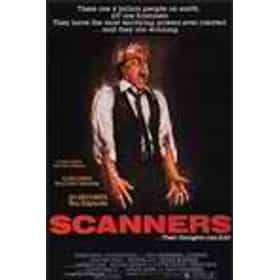 Scanners is a 1981 Canadian science-fiction horror film written and directed by David Cronenberg and starring Jennifer O'Neill, Steven Lack, Michael Ironside, and Patrick McGoohan. In the film, "scanners" are people with unusual telepathic and telekinetic powers. ConSec, a purveyor of weaponry and security systems searches out scanners to use them for its own purposes. The film's plot concerns the attempt by Darryl Revok, a renegade scanner, to wage against ConSec. Another scanner, Cameron Vale, is dispatched by ConSec to stop Revok. ... more on Wikipedia

Scanners is ranked on...

Scanners is also found on...