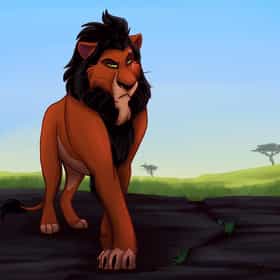 Scar (formerly Prince Taka) was the main antagonist of the Lion King franchise. He was Simba's uncle, Mufasa's younger brother, and Ahadi's second and youngest son. In a deleted scene from The Lion King, it was revealed that Scar chose Nala to be his queen, but he and the hyenas ended up banishing her and the other lionesses when Nala refused to marry Scar and they stood up against him. He was voiced by Jeremy Irons in the first film, Jim Cummings in the second film (also as his singing voice sometimes), James Horan in Kingdom Hearts II, and Tom Kane in Sorcerers of the Magic Kingdom. ... more on Wikipedia

Scar is ranked on...

#126 of 3,827 The Best Movie Characters of All Time 1M VOTES List of the best movie characters of all time, ranked by film buffs and people like you. This list includes performances by ...
#5 of 961 People who voted for Scar... People under 30 are 2x more likely to vote for this also upvote Harry Potter Franchise on The Most Rewatchable Movies The Greatest Movie Villains of All Time 1.2M VOTES While some of us tend to despise movie villains, plenty of movie-goers favor some of these antagonists. Whether that's ...
#21 of 98 The Greatest Cats in Cartoons & Comics, Ranked by Fans 32.9k VOTES Cats are awesome, and doubly so for cartoon cats! Cats are often used in cartoons and animated films as comic relief and ant...
#49 of 174 The Best To Worst Kingdom Hearts Characters 26.1k VOTES Kingdom Hearts is a magical action-adventure RPG gaming series combining the worlds of Disney and Final Fantasy, b...
#16 of 24 20+ Brutal Deaths in Children's Cartoons That Caught You by Surprise 12.9k VOTES Masked by bright colors, funny voices, and kid-friendly entertainment, it's easy to forget cartoons often feature some ...
#4 of 26 Disney Animated Characters Who Secretly Appear In Other Disney Movies 3.5k VOTES Disney loves to hide things within their movies for fans to find, some impossible to miss and others requiring you to l...
#7 of 81 The Fictional Bosses You'd Least Like to Work For 5.8k VOTES List of the fictional bosses you’d least like to work for. Think your boss is bad? Your boss may not even compare to some of...
#3 of 14 Cartoon Characters You Never Realized Suffer From Mental Disorders 8.1k VOTES Cartoons are a fond childhood memory until you really start to think about some of the animated heroes and villains. Be...
#7 of 41 Which Animated Disney Villains Deserve Live-Action Origin Movies? 736 VOTES While Disney princesses are beloved everywhere, it's the villains who intrigue people the most. Disney fans were thrill...
The Most Influential Characters in Furry History 359.8k VIEWS Even though the furry fandom has only recently received mainstream press, fans of anthropomorphic animals have been attendin...

Scar is also found on...