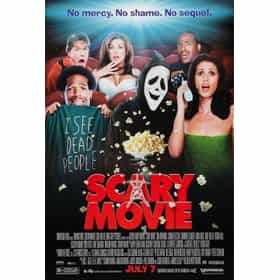 Scary Movie is a 2000 horror comedy spoof film directed by Keenen Ivory Wayans. It is an American dark comedy that heavily parodies the horror, slasher, and mystery genres. Several mid- and late-'90s films and TV shows are spoofed, especially Scream, along with I Know What You Did Last Summer, Buffy the Vampire Slayer, The Sixth Sense, The Usual Suspects, The Matrix, The Blair Witch Project, and Dawson's Creek. The tagline reads "No mercy. No shame. No sequel.", the last reference being an ironic nod towards the tendency of popular horror movies becoming cash cow franchises. 2001 saw the release of Scary Movie 2, with the appropriate tagline "We lied". Later video ... more on Wikipedia

The Most Hilarious Quotes From 'Scary Movie' 120 votes Laugh your scares away with the funniest quotes from Scary Movie. Filled with funny lines, memorable one-liners, and a bunch...

Scary Movie is ranked on...

Scary Movie is also found on...