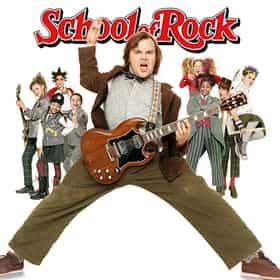 School of Rock is a 2003 American comedy film directed by Richard Linklater, written by Mike White, and starring Jack Black. The main plot follows struggling rock singer and guitarist, Dewey Finn, who is kicked out of his band and subsequently disguises himself as a substitute teacher at a prestigious prep school. After witnessing the musical talent in his students, Dewey forms a band of fourth-graders to attempt to win the upcoming Battle of the Bands and pay off his rent. The picture's supporting cast features Joan Cusack, Sarah Silverman, and Mike White. A stage musical adaption is planned to open on Broadway in late 2015, with a television adaption also planned. ... more on Wikipedia

Every Song in School of Rock, Ranked by Singability 187 votes The School of Rock soundtrack is, unsurprisingly, a love song to classic rock. The original 2003 film, while fundamentally a...
Stick It To The Man With The Best 'School of Rock' Quotes 54 votes Raise your guitar picks and rock out to the most hilarious School of Rock quotes. Packed with funny lines, memorable one-lin...
What Happened To All The Kids From School Of Rock 64.9k views In 2003, funnyman Jack Black led a bunch of precocious school kids to live out his (and their) musical fantasies in one of t...

School of Rock is ranked on...

School of Rock is also found on...