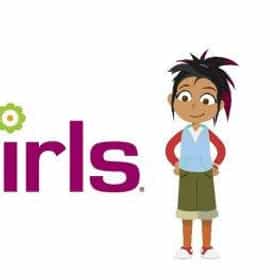 SciGirls is an American children's animated and live-action television series that premiered on February 13, 2010 on PBS Kids Go!. It is produced by TPT Productions, Soup2Nuts, and Saban Brands. On May 1, 2010 the series went on hiatus until Season 2 on October 13, 2012 to December 22, 2012. The series will end on May 22, 2015. The episodes broadcast on most PBS stations and had reruns on the weekends. It is an educational outreach program for elementary and middle-school children based on proven best practices for science, technology, engineering and math education for girls. It was launched in February 2011 and produced by Twin Cities Public Television, the episodes are broadcast on ... more on Wikipedia

SciGirls is ranked on...

#67 of 78 The Best PBS Kids TV Shows Ever, Ranked 106.3k VOTES If you were a kid in the 90s or 2000s, you probably have seen several of the best PBS kids TV shows. Many of those PBS kids ...
#36 of 59 Good TV Shows for Tweens 1.5k VOTES Finding the best TV shows for tweens to watch can be tricky. Sure they're almost teens (almost) and want to watch something ...
#12 of 14 The Best Current PBS Kids Shows 411 VOTES Wondering what to watch on PBS Kids? If you have young children, you're likely looking for some family friendly program...
#30 of 51 The Best Educational Television Shows 4.5k VOTES The very best educational television shows on television, ranked from best to worst. This list of the greatest educational t...
#22 of 40 Good TV Shows for 5 Year Olds 237 VOTES Finding the best TV shows for 5-year-olds to watch can be tricky. A lot of those shows for little kids can still feel like t...
#7 of 21 The Best Science Shows For Kids 97 VOTES Aside from being an easy way to waste a whole day by binge-watching sci-fi, television does have its educational uses. Thoug...