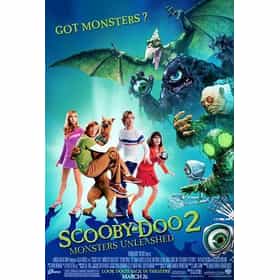 Scooby-Doo 2: Monsters Unleashed is a 2004 comedy horror film directed by Raja Gosnell, written by James Gunn and released by Warner Bros. Based on the 1969–71 animated television series, Scooby-Doo, Where Are You?, it is the second installment in the Scooby-Doo live-action film series, and a sequel to 2002's Scooby-Doo. The returning cast features Freddie Prinze Jr. as Fred, Sarah Michelle Gellar as Daphne, Matthew Lillard as Shaggy, Linda Cardellini as Velma, and Neil Fanning as the voice of title protagonist Scooby-Doo. Series newcomers include Seth Green, Tim Blake Nelson, Peter Boyle, and Alicia Silverstone who appear in supporting roles. The film was released on March 26, 2004 to ... more on Wikipedia

Scooby-Doo 2: Monsters Unleashed is ranked on...