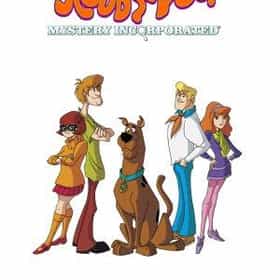 Scooby-Doo! Mystery Incorporated is the eleventh incarnation of Hanna-Barbera's Scooby-Doo animated series, and the first incarnation not to be first-run on Saturday mornings. The series is produced by Warner Bros. Animation and Cartoon Network and premiered in the United States on Cartoon Network on April 5, 2010, with the next twelve episodes continuing, and the first episode re-airing, on July 12, 2010. The series concluded on April 5, 2013 with two seasons and fifty-two episodes, with a total of twenty-six episodes per season. By episode count, this is the longest running Scooby-Doo series to date. Mystery Incorporated returns to the early days of Scooby and the gang, when they are ... more on Wikipedia

Scooby-Doo! Mystery, Inc. is ranked on...

#49 of 477 People who voted for Scooby-Doo! Mystery, Inc.... also upvote Harry Potter Franchise on The Best Movies of All Time The Greatest Animated Series Ever Made 645.5k VOTES The top animated series of all time include some of the best TV shows ever to flicker in your living room (or on your comput...
#156 of 717 The Best Cartoons of All Time 3M VOTES There have been many fantastic animated TV shows throughout the history, but which ones are the best? Some people think that...
#86 of 236 The Greatest Cartoon Theme Songs of All Time 164.2k VOTES For entire generations of kids, some of their most fond memories are of watching Saturday morning cartoons. The animated sho...
#211 of 391 TV Shows That Only Smart People Appreciate 1.3M VOTES Since about the early 2000s, TV audiences have been blessed with what many experts call The Golden Age of Television. In oth...
#6 of 22 The Best Versions Of Scooby Doo You Watched As A Kid 11k VOTES The Mystery Machine has been chugging along since the late '60s and there have been a lot of television and film versions of...
#134 of 1,328 The Best Guilty Pleasure TV Shows 19.7k VOTES List of the best guilty pleasure TV shows, past and present, including sitcoms, dramas, reality shows, and game shows. These...
#18 of 92 The Best CBBC Channel TV Shows 62.5k VOTES List of popular CBBC Channel shows, ranked from best to worst. This list of the top CBBC Channel TV series, both current and...
#11 of 375 The Best Children's TV Shows 49.6k VOTES Here you have it, folks: a list of the very best kids' shows on television, ranked from best to worst, as voted on by people...
#28 of 72 The Best Animated Shows On Netflix 3.2k VOTES Here are the best animated shows streaming now on Netflix. Whether you're looking for classic cartoons or animated shows for...