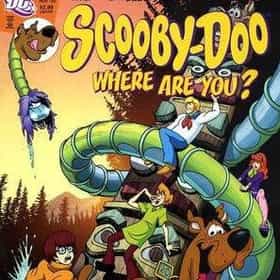 Scooby Doo, Where Are You! is the first incarnation of the long-running Hanna-Barbera Saturday morning cartoon series Scooby-Doo. Created by Joe Ruby and Ken Spears, it premiered on CBS September 13, 1969, and ran for two seasons for a total of 25 episodes. Its final first-run episode aired on October 31, 1970. Nine episodes from Scooby-Doo's 1978-79 season, first run on ABC, were originally broadcast with the 1969 Scooby Doo, Where Are You! opening and closing sequences. The entire 1978-79 season is sometimes marketed as the third season of the original Where Are You! series. ... more on Wikipedia

Scooby-Doo, Where Are You! is ranked on...

#4 of 717 People who voted for Scooby-Doo, Where Are You!... also upvote Dark Knight Franchise on The Best Superhero Movies Ever Made The Best Cartoons of All Time 3M VOTES There have been many fantastic animated TV shows throughout the history, but which ones are the best? Some people think that...
#4 of 385 The Best Kids Cartoons of All Time 1.2M VOTES This list contains information about the best kids cartoons, ranked by your votes. Over the years, there have been tons of g...
#1 of 236 The Greatest Cartoon Theme Songs of All Time 163.8k VOTES For entire generations of kids, some of their most fond memories are of watching Saturday morning cartoons. The animated sho...
#2 of 85 The Best Hanna-Barbera Cartoons You're Dying to Watch Again 45.5k VOTES We've traveled through cartoon history to bring you a list of all the best Hanna-Barbera cartoons. William Hanna and Joseph ...
#2 of 22 The Best Versions Of Scooby Doo You Watched As A Kid 11k VOTES The Mystery Machine has been chugging along since the late '60s and there have been a lot of television and film versions of...
#11 of 42 The Greatest Cartoon Shows on Kids' WB 23.8k VOTES Kids' WB may go down as the single most consistent block of children's programming of all time. The amount of hit shows they...
#18 of 44 The Best Children's Cartoons with Adult Humor 13.5k VOTES The absolute best children’s cartoons with adult humor, ranked from the most popular to the least based by the Ranker commun...
#25 of 134 People who voted for Scooby-Doo, Where Are You!... People over 50 are 2x more likely to vote for this The Best Cartoon Network TV Shows 495.3k VOTES Cartoon Network shows have been bringing some of the funniest and most action-packed cartoons that both kids and adults can ...
#49 of 171 The Best Mystery TV Shows 71.4k VOTES The best Mystery TV shows make trying to solve a great mystery exciting for both the fans and characters. Nothing beats the ...
#4 of 54 The Best 1960s Animated Series 7.7k VOTES These are the very best 1960s animated series, ranked from best to worst by user votes. From a sailor man, to a family livin...

laredo tv series episodes, william hung she bangs, 4some tv show, i claudius cast, build new life in the country, the favor movie cast, current black tv shows, knights of the zodiac, where was witches of eastwick filmed, return of the seven cast