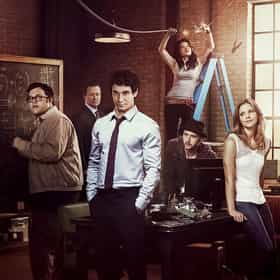 Scorpion is an American drama television series loosely based on the life of self-proclaimed genius and computer expert Walter O'Brien. In the series, O'Brien and his genius friends help each other to solve complex global problems and save lives. Scorpion airs in the United States on Mondays at 9:00 p.m. ET on CBS. It premiered on September 22, 2014, as part of the 2014–15 television season. On October 27, 2014, CBS placed a full season episode order for the first season. On January 12, 2015, the show was renewed for a second season. ... more on Wikipedia

The Best Episodes of Scorpion 1.2k votes There are so many good episodes of Scorpion, but which ones really stand out? Do you like "Dominoes" the best, or ...
Ranking the Best Seasons of 'Scorpion' 13 votes This list features the best seasons of Scorpion, listed from best to worst with pictures of season posters when available. F...

Scorpion is ranked on...