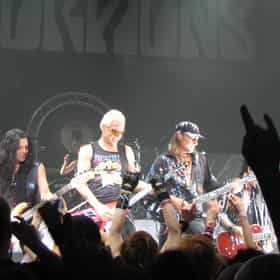 Scorpions are a German rock band formed in 1965 in Hanover by Rudolf Schenker. Since the band's inception, its musical style has ranged from hard rock to heavy metal. The lineup from 1978–1992 was the most successful incarnation of the group, and included Klaus Meine (vocals), Rudolf Schenker (rhythm guitar), Matthias Jabs (lead guitar), Francis Buchholz (bass), and Herman Rarebell (drums). The band's only constant member has been Schenker, although Meine has been the lead singer for all of Scorpions' studio albums, while Jabs has been a consistent member since 1979, and bassist Paweł Mąciwoda and drummer Mikkey Dee have been in the band since 2003 and 2016 respectively.During the ... more on Wikipedia

Scorpions is ranked on...

#353 of 358 The Worst Rock Bands of All Time 749.5k VOTES Here they are: the absolute worst rock bands in history, ranked from the most awful bands to the kind of okay but still pret...
#18 of 284 People who voted for Scorpions... also upvote Lord of the Rings Franchise on The Best Movies of All Time Musicians Who Belong in the Rock and Roll Hall of Fame 427.6k VOTES Update: the Rock and Roll Hall of Fame has listened to your feedback and inducted a number of artists on this list sinc...
#70 of 620 People who voted for Scorpions... People Age 30 to 49 are 3x more likely to vote for this The Greatest Live Bands of All Time 333.2k VOTES List of the greatest live bands or artists of all time, created and ranked by music fans worldwide asks the question "w...
#15 of 367 The Best Pop Artists of the 1980s 388.2k VOTES The 1980s was a huge decade in terms of breaking pop stars. 80s artists benefited from the rising popularity of cable televi...
#21 of 424 People who voted for Scorpions... People over 50 are 2x more likely to vote for this The Greatest Heavy Metal Bands Of All Time 869.3k VOTES Update: Follow Ranker's official New Metal 2020 playlist on Spotify! Creating some of the best metal songs of 20...
#68 of 333 The Greatest Classic Rock Bands 490.8k VOTES The greatest classic rock bands of all time embody the spirit of a generation of people who just wanted to rock. These top c...
#73 of 107 Which Bands Or Musicians Do You Most Want To See Before They (Or You) Kick The Bucket? 38.1k VOTES There's a certain energy associated with a live performance that just can't be replicated or synthesized by a single album. ...
#44 of 319 The Best Bands With Animal Names 33k VOTES The best bands with animals in their names criss-cross the music world with offerings from music genres like indie rock, cla...
#1 of 40 The Best Bands Named After Desert Animals 658 VOTES Bands take their names from all manner of people, places, and things. So perhaps it's not surprising that so many bands are&...
#90 of 318 The Best Progressive Rock Bands/Artists 164.3k VOTES Loved by many and hated by some, progressive rock - or prog rock - is one of the most popular subgenres of rock music. Meldi...
#13 of 95 The Best Glam Metal Bands 21.2k VOTES The 1980s offered music listeners a new type of sound in terms of glam bands. Before, people glam bands meant over-the-top p...
#8 of 101 The Best Classic Metal Bands 19k VOTES When heavy metal first emerged at the beginning of the 1970s, naysayers would have never suspected that the bands from those...
#1 of 76 The Best German Rock Bands/Artists 4.3k VOTES German rock artists list, with photos, ranked best to worst by votes. List of good german rock bands includes a filter so yo...
The Best Guitar Teams 11.7k VIEWS Typical Best Guitarist rankings are not usually fair to the "team players" of great guitar bands. This list is for...
Fave Bands to Ski To 4.6k VIEWS I have a very carefully chosen skiing playlist w 100s of diverse tracks. But this year I didn't get to update it quite enoug...

Scorpions is also found on...