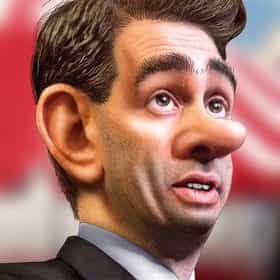 Scott Kevin Walker (born November 2, 1967) is an American politician who served as the 45th Governor of Wisconsin from 2011 to 2019. He is a member of the Republican Party. Born in Colorado Springs, Colorado, Walker was raised in Iowa and in Delavan, Wisconsin. He was elected to the Wisconsin State Assembly in 1992, representing a district in western Milwaukee County. In 2002, Walker was elected Milwaukee County Executive in a special election following the resignation of F. Thomas Ament; he was elected for a full term in 2004 and was re-elected in 2008. Walker ran for Governor of Wisconsin in 2006, but dropped out of the race before the primary election. He ran again in 2010 and won. ... more on Wikipedia

Scott Walker is ranked on...

#67 of 223 Lying Politicians: The Worst Liars In American Politics 430.3k VOTES Do any politicians tell the truth anymore? Maybe, but you won't find them here. This list has the least trustworthy people i...
#73 of 111 Famous Politicians You'd Want to Have a Beer With 135.5k VOTES Which likable politicians would be fun to have a few drinks with? Many politicians market themselves as regular folks you'd ...
#55 of 104 The Most Annoying Politicians Currently in Office 82.6k VOTES Annoying politicians are a fact of life in these United States. In a time when the gulf between the two major parties has ne...
#96 of 265 People who voted for Scott Walker... People on the West Coast are 3x more likely to vote for this The Most Influential Politicians in American History 160k VOTES The most influential politicians in American history, ranked by everyone. Anyone can vote on this list, making these ranking...
#462 of 1,452 Celebrity Death Pool 2018 477.7k VOTES Welcome to Celebrity Death Pool 2018! In increasingly uncertain times, there remains one constant in life - we all die. Cele...
#24 of 99 US Political Figures We Hate the Most: 2013 28.5k VOTES I'm starting this list with the political figures I hate the most, but I'm opening it to voting and to the public. Obviously...
#22 of 24 The Best 2016 Presidential Candidates 71.5k VOTES A list of the 2016 presidential candidates, as ranked by savvy politicos. The electoral field is wide open and chock full of...
#10 of 19 2016 Campaign Trails You Would Not Want to Be On 3.9k VOTES The 2016 US presidential election season is already underway - that year and a half long grueling process of American politi...
Famous People Whose Last Name Is Walker 12.9k VIEWS Being a fairly common name, it's no surprise there are a lot of famous people with the last name Walker. Do you recognize al...
Famous People Named Scott 27.3k VIEWS List of famous people named Scott, along with photos. How many celebrities named Scott can you think of? The famous Scotts b...
Famous People You Didn't Know Were Evangelical Christians 20.3k VIEWS Faith is one of the most important aspects of life for evangelical Christians. Maybe it's that focus on tradition and salv...

Scott Walker is also found on...