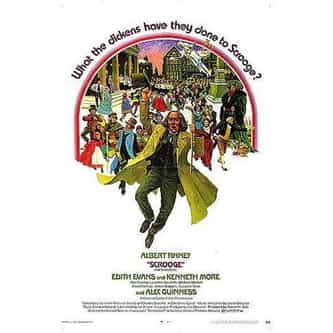 Tagline
A Christmas Carol was always meant to be sung!
A NEW MUSICAL
What the dickens have they done to Scrooge?... They've put him in a big
big musical.

Scrooge is a 1970 musical film adaptation of Charles Dickens' classic 1843 story, A Christmas Carol. It was filmed in London between January and May 1970 and directed by Ronald Neame, and starred Albert Finney in the title role. The film's musical score was composed by Leslie Bricusse, and arranged and conducted by Ian Fraser. With eleven musical arrangements interspersed throughout, the award-winning motion picture is a faithful musical retelling of the original, with one exception noted ... more on Wikipedia

Scrooge IS LISTED ON