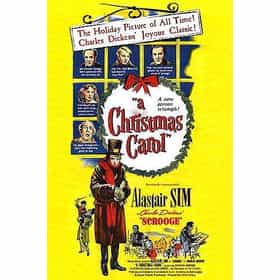 Scrooge is a 1951 film adaptation of Charles Dickens's A Christmas Carol. It starred Alastair Sim as Ebenezer Scrooge and was directed by Brian Desmond Hurst, with a screenplay by Noel Langley. It was released as A Christmas Carol in the United States. The film also features Kathleen Harrison in an acclaimed turn as Mrs. Dilber, Scrooge's charwoman. George Cole stars as the younger version of Scrooge, Hermione Baddeley as Mrs. Cratchit, Mervyn Johns as Bob Cratchit, Clifford Mollison as Samuel Wilkins, a debtor, Jack Warner as Mr. Jorkin, a role created for the film, Ernest Thesiger as Marley's undertaker and Patrick Macnee as young Jacob Marley. Michael Hordern plays Marley's ghost, ... more on Wikipedia

Scrooge is ranked on...

#5 of 14 All The Ghosts Of Christmas Yet To Come, Ranked By Scariness 502 VOTES Charles Dickens's A Christmas Carol has been a mainstay of the holiday season for generations. The heartwarming tale of...
#175 of 465 The Best Feel-Good Movies 436.7k VOTES Want to feel warm and fuzzy inside? This is a ranked list of the best feel-good movies that make us experience all the good ...
#94 of 143 The Best Classic Fantasy Movies, Ranked 31.8k VOTES This list contains information on the best classic fantasy movies, ranked from best to worst by user votes. The best classic...
#211 of 588 The Best Fantasy Movies 905.7k VOTES A list of the best fantasy movies ever made. This fantasy film list can be sorted by cast, year, director and more. This lis...
#21 of 81 The Best Winter Movies 7.1k VOTES Some of our favorite memories take place in winter. From the first winter holidays, to the first snow fall of the year, and ...
#50 of 100 The Best Movies of 1951 3.4k VOTES List of the best movies of 1951, with movie trailers when available. Famous actors and actresses like Jeff Bridges, William ...
#2 of 11 The Best '50s Christmas Movies 504 VOTES The weather outside is frightful, but the best '50s Christmas movies are here to keep you warm and cozy during the...

Scrooge is also found on...