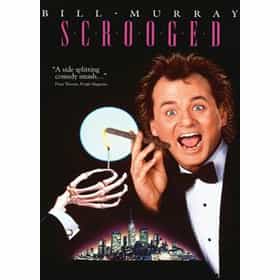 Scrooged is a 1988 American Christmas comedy film, a modernization of Charles Dickens' A Christmas Carol. The film was produced and directed by Richard Donner, and the cinematography was by Michael Chapman. The screenplay was written by Mitch Glazer and Michael O'Donoghue. The original music score was composed by Danny Elfman. The film stars Bill Murray, with Karen Allen, Bobcat Goldthwait, Alfre Woodard, John Forsythe, Carol Kane, John Houseman, and Robert Mitchum in supporting roles. Murray's brothers Brian, John, and Joel also appear in the film. The film was marketed with references to Ghostbusters which had been a great success four years earlier. In the USA, the tagline was, ... more on Wikipedia

Scrooged is ranked on...

Scrooged is also found on...