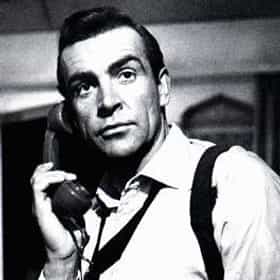 Sir Thomas Sean Connery (born 25 August 1930) is a retired Scottish actor and producer, who has won an Academy Award, two BAFTA Awards, one being a BAFTA Academy Fellowship Award, and three Golden Globes, including the Cecil B. DeMille Award and a Henrietta Award. Connery was the first actor to portray the character James Bond in film, starring in seven Bond films (every film from Dr. No to You Only Live Twice, plus Diamonds Are Forever and Never Say Never Again), between 1962 and 1983. In 1988, Connery won the Academy Award for Best Supporting Actor for his role in The Untouchables. His films also include Marnie (1964), Murder on the Orient Express (1974), The Man Who Would Be King ... more on Wikipedia

The Very Best Sean Connery Movies 16.5k votes At last: a list of the best Sean Connery movies, ranked best to worst with movie trailers when available. Sean Connery is sy...
Legendary Behind-The-Scenes Stories From Sean Connery's Illustrious Career 4k views Sean Connery's decades-long career is filled with interesting stories and anecdotes. The actor is arguably the best-known Ja...
Sean Connery Nearly Played All Of Your Favorite Movie Characters 435 votes Sean Connery is a titan of cinema. He's been around for a long time, portraying both memorable and rather forgettable charac...

Sean Connery is ranked on...

Sean Connery is also found on...