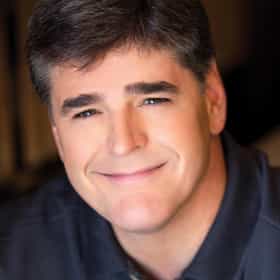 Sean Patrick Hannity (born December 30, 1961) is an American talk show host and conservative political commentator. Hannity is the host of The Sean Hannity Show, a nationally syndicated talk radio show. He also hosts a cable news show, Hannity, on Fox News. He worked as a general contractor, and volunteer talk show host at UC Santa Barbara in 1989. He later joined WVNN in Athens, Alabama, and shortly afterward, WGST in Atlanta. In 1996, he was hired by Fox and was accompanied by Alan Colmes when he received his show Hannity & Colmes. After leaving WGST, he worked at WABC in New York until 2013. Since 2014, he has worked at WOR. After Colmes announced his departure in January 2008, ... more on Wikipedia

Every Conspiracy Theory Sean Hannity Has Supported, Ranked By Insanity 2.1k votes No matter which side of the American political divide you find yourself on, you're almost certain to encounter a steady stre...

Sean Hannity is ranked on...

#51 of 524 Annoying Celebrities Who Should Just Go Away Already 1.2M VOTES The most annoying celebrities, ranked by entertainment fans themselves. These annoying celebs are obnoxious, overexposed, ...
#9 of 91 People You Want South Park to Make Fun of 53.1k VOTES Which celebrity do you want to see made fun of by Trey and Matt on South Park? The show does a truly incredible job of ...
#68 of 113 People We Loved to Hate in 2013 40.4k VOTES These are the People we loved to hate in 2013. This list includes a slew of shocking, disheartening and downright dirty happ...
#24 of 173 Celebrities You're Sick Of In 2018 64k VOTES Given it was quite the year for scandal and controversy, it's no surprise there are so many celebs the public is tired ...
#13 of 57 Dream Presidential Debate Moderators 12.3k VOTES These dream presidential debate moderators might not ever get the chance to prove how awesome they would be at moderating pr...
Here's a List of Every Known Republican Celebrity 1.8M VIEWS Conservative celebrities - this list of Republican celebrities has over 400 celebrities who are Republicans. What celebritie...
50+ Celebrities Who Have Appeared in Comic Books 9.4k VIEWS Comics are more popular than ever, and while some celebrities star in comic book movies, the celebrities on this list, loose...
Journalists Who Were Caught Lying 159.2k VIEWS It's not just politicians who lie through their teeth. Even some of the most trusted names in news have told a tall tale h...
#32 of 32 Celebrities We Want To See On Dancing with the Stars‎ 3.9k VOTES Some actors and actresses are obvious triple-threats and some are not, but it's always interesting to see which stars can bu...

Sean Hannity is also found on...