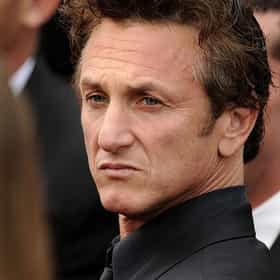 Sean Justin Penn (born August 17, 1960) is an American actor, director and filmmaker. He has won two Academy Awards, for his roles in the mystery drama Mystic River (2003) and the biopic Milk (2008). Penn began his acting career in television, with a brief appearance in episode 112 of Little House on the Prairie, December 4, 1974, and directed by his father Leo Penn. Following his film debut in the drama Taps (1981), and a diverse range of film roles in the 1980s, including Fast Times at Ridgemont High (1982), Penn garnered critical attention for his roles in the crime dramas At Close Range (1986), State of Grace (1990), and Carlito's Way (1993). He became known as a prominent leading ... more on Wikipedia

Daniel Day-Lewis
24 Times Sean Penn Acted Like a Douche 912 votes Oh, Sean Penn. One minute, he was super tanned, high Sean Penn - the next he was super tanned, smug Sean Penn, shotgun-totin...
Sean Penn Has Always Been Hollywood's Biggest Psycho 23.5k views Sean Penn is one of Hollywood's most admired actors when it comes to his talent, but when his personal life is called into q...
The Best Sean Penn Movies 2.3k votes List of the best Sean Penn movies, ranked best to worst with movie trailers when available. Sean Penn's highest grossing mov...
Sean Penn's Loves & Hookups 100.6k views Who is Sean Penn dating? Who Sean Penn dated; list of Sean Penn loves, ex girlfriends; marriages and breakup rumors. The lov...
This Must Be the Place Movie Quotes 120 votes "This Must Be the Place" movie quotes tell the tale of a retired musician who on a journey to avenge his late fath...

Sean Penn is ranked on...

Sean Penn is also found on...