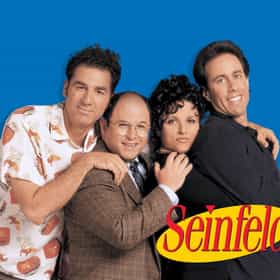 Seinfeld is an American television sitcom that originally ran for nine seasons on NBC from July 5, 1989, to May 14, 1998. It was created by Larry David and Jerry Seinfeld, the latter starring as a fictionalized version of himself. Set predominantly in an apartment block in Manhattan's Upper West Side in New York City, the show features a handful of Jerry's friends and acquaintances, particularly best friend George Costanza, former girlfriend Elaine Benes, and neighbor across the hall Cosmo Kramer. Seinfeld was produced by Castle Rock Entertainment. In syndication the series has been distributed by Sony Pictures Television since 2002. It was largely co-written by David and Seinfeld with ... more on Wikipedia

Seinfeld is ranked on...

Seinfeld is also found on...