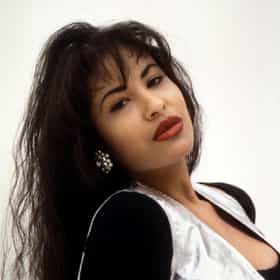 Selena Quintanilla-Pérez (April 16, 1971 – March 31, 1995) was an American singer, songwriter, spokesperson, model, actress, and fashion designer. Called the Queen of Tejano music, her contributions to music and fashion made her one of the most celebrated Mexican-American entertainers of the late 20th century. Billboard magazine named her the top-selling Latin artist of the 1990s decade, while her posthumous collaboration with MAC cosmetics became the best-selling celebrity collection in cosmetics history. Media outlets called her the "Tejano Madonna" for her clothing choices. She also ranks among the most influential Latin artists of all time and is credited for ... more on Wikipedia

Everything The J. Lo Movie Got Wrong About The Meteoric Rise And Tragic End Of Selena Quintanilla 21k views The Queen of Tejano enchanted the music world in the 1990s, and everyone wanted to know the true story of Selena Quintanilla...

Selena is ranked on...

Selena is also found on...