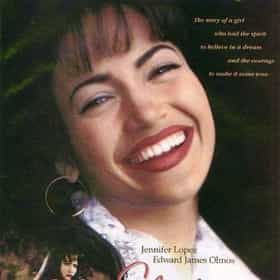 Selena is a 1997 American biographical musical drama film about the life and career of the late Tejano music star Selena, a recording artist well known in the Mexican-American and Hispanic communities in the United States and Mexico before her life was taken by Yolanda Saldívar, the president of her fan club at the age of 23. The film stars Jennifer Lopez in her breakthrough role as Selena. Her father, Abraham Quintanilla, Jr., is played by Edward James Olmos and Constance Marie plays Marcella Quintanilla. ... more on Wikipedia

Everything The J. Lo Movie Got Wrong About The Meteoric Rise And Tragic End Of Selena Quintanilla 20.1k views The Queen of Tejano enchanted the music world in the 1990s, and everyone wanted to know the true story of Selena Quintanilla...

Selena is ranked on...

Selena is also found on...

List of All Movies Released in 1997 Movies Distributed by Warner Bros. Pictures