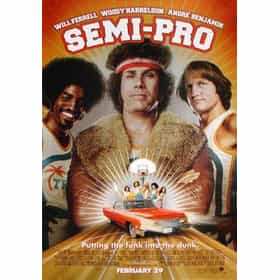 Semi-Pro is a 2008 American sports comedy film from New Line Cinema. The film was directed by Kent Alterman and stars Will Ferrell, Woody Harrelson, André Benjamin and Maura Tierney. The film was shot in Los Angeles near Dodger Stadium, in Detroit, and in Flint, Michigan. It was released in theaters on February 29, 2008 and was released on DVD and Blu-ray Disc on June 3, 2008. This was the last film from New Line Cinema before they merged with Warner Bros.. ... more on Wikipedia

Semi-Pro is ranked on...

Semi-Pro is also found on...