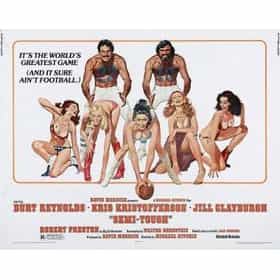 Semi-Tough is a 1977 comedy film directed by Michael Ritchie and starring Burt Reynolds, Kris Kristofferson, Jill Clayburgh, Lotte Lenya, Bert Convy, and Brian Dennehy, set in the world of American professional football. The plot involves a love triangle between the characters portrayed by Reynolds, Kristofferson and Clayburgh. Semi-Tough also includes a parody of Werner Erhard's Erhard Seminars Training, depicted in the film as an organization called "B.E.A.T." The film is based on the novel of the same name by Dan Jenkins. It was adapted for the screen by writer Walter Bernstein and director Ritchie, who added a new storyline that included a satire of the self-help movement ... more on Wikipedia

Semi-Tough is ranked on...

Semi-Tough is also found on...