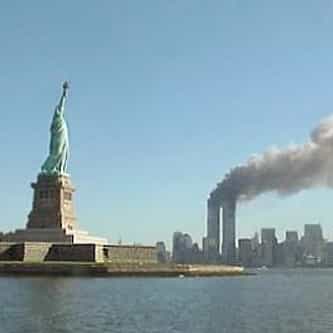 The September 11 attacks were a series of four coordinated terrorist attacks by the Islamic terrorist group al-Qaeda on the United States in New York City and the Washington, D.C. metropolitan area on Tuesday, September 11, 2001. The attacks killed 2,996 people and caused at least $10 billion in property and infrastructure damage. Four passenger airliners were hijacked by 19 al-Qaeda terrorists to be flown into buildings in suicide attacks. Two of the planes, American Airlines Flight 11 ... more on Wikipedia

28.4k readers The Most Creative And Controversial Ways Movies And Shows Dealt With 9/11

76.9k readers George Carlin Performed A Comedy Set The Day Before 9/11 - And It Was Eerily Prophetic

101.7k readers 'The Woman Who Wasn't There' Tells The Shocking Story Of A 9/11 Survivor Who Wasn't All She Seemed

6.8k readers How A Feud Between The CIA And The FBI May Have Contributed To 9/11

113.6k readers Here's What Newspapers Around The World Looked Like The Day After 9/11

September 11 attacks IS LISTED ON